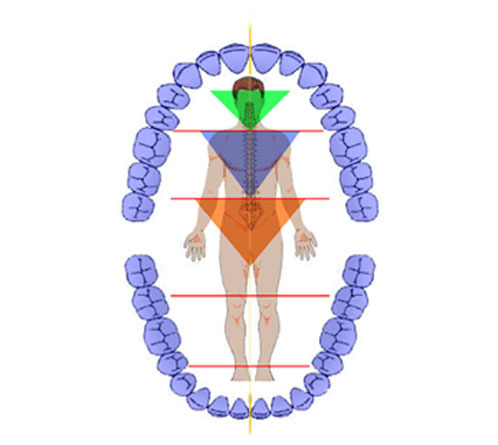 The working criterion with the AMCOP Bio Activators in a global vision of the body includes the correction of the dental gold apparatus, of the skull and of the visus, which determines a rebalancing of the architecture of the cranial mass and, therefore, vertebral, with benefits on the posture and on the psycho-physical condition of the person. The AMCOP Bio Activator allows a functional, early and interceptive education for the child, but it can also be used for the adult. Malocclusion can be caused by distortions of the dental arches and craniofacial structures (in a context of head injury) associated with the patient's dysfunctional problems. It should be noted that most children have lingual dysfunctions and dysmorphosis, resulting in a badly formed mouth and undeveloped occlusion. This is why it is important to intervene soon. An interceptive treatment allows you to simplify orthodontic work.

The action of the device acts as a function regulator and harmonious growth stimulator of the Dento-Cranial-Facial system. The dentist must consider the patient globally for a correct diagnosis and thus be able to establish a treatment plan, the aim is to achieve a normal functional result and an aesthetic result as perfect as possible. A well-performed orthodontic treatment aims to achieve a harmonious development and balance of the dental arches and to reposition the individual in the correct verticality through a suitable occlusal treatment. The AMCOP Bio Activator is a valid tool for functional orthopedic orthodontics and is therefore indicated for a treatment suitable for the complementary cooperation of the orthodontist with operators such as the osteopath, the posturologist and the speech therapist. The device is also indicated to improve the neurovegetative functions of the mouth, ,sucking-swallowing, chewing, phonation and breathing to improve the nasal-ventilatory function with a return to normal function of the nasal-oral-laryngeal-pharyngeal area. 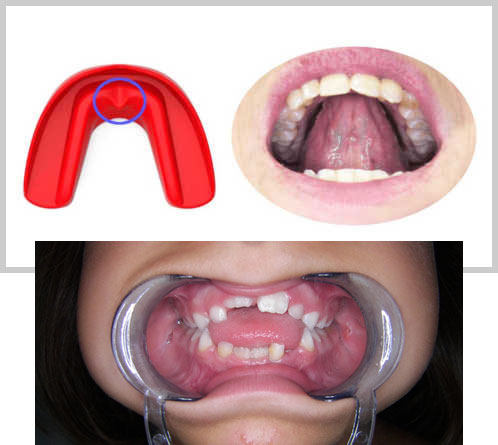 THE NEUROVEGETATIVE FUNCTIONS OF THE MOUTH

The shape arises from the need of our body to perform a function.

From the beginning of life, the mouth is shaped by vital functions, that is, by the oropharyngeal neurovegetative functions (sucking-swallowing, breathing, chewing, speaking). The oropharyngeal autonomic functions are the heart of dental dynamics. Scientific studies have shown how dysfunctional problems associated with more or less severe dysmorphosis are at the basis of malocclusion, abnormal swallowing associated with oral breathing can be the cause of malocclusion. Intercepting the dysfunctional tongue by educating its correct posture and correct swallowing is essential during the treatment phase, even in adult patients.

These can be considered the primordial functions par excellence. The sucking reflex is a remnant of the buccal pump, which triggers a swallowing movement that plays an important role in the postural balance of the individual by opening the Eustachian tube and balances the pressures of the middle and inner ear . The appearance of milk teeth and the positioning of the dental arches around thirty months bring a new physiology of swallowing linked to trigeminal proprioceptivity.

From birth, the baby swallows by making a reflex contraction of the lips and the tongue relies on them. To obtain a correct and physiological swallowing in the adult phase, the tongue must stretch out over the entire palate and with its tip must stimulate the retroincisive papillae, a very reflexogenic receptor area, so the lips no longer need to contract. This happens once all the deciduous teeth have appeared. The child must acquire correct swallowing by the age of three; if this does not happen, one can imagine a tongue that is badly positioned on the teeth resulting in a deficit of bone stimulation and consequent failure of the upper jaw to develop on a very malleable bone in the growth phase.

The tongue, therefore, is the true conformer of the palate. During the 24 hours one swallows on average between 1500-2000 times, usually every half minute during wakefulness and every minute during sleep. The pressure exerted by the tip of the tongue is about one kilogram, which means that during the 24 hours the area where the thrust of the tongue is released must bear a pressure of about 2000 kg. We can, therefore, easily realize why there is so often the appearance of damage to the osteo-dental system when the tongue assumes an abnormal posture both in the resting position (not respecting the spot) and during the act of swallowing.

Incorrect swallowing in orthodontics can, therefore, be considered the main cause of dental malocclusion and is the point of passage of problems of the mouth inside the body with alterations of the cervical part and with the involvement of the spine. A dysfunctional tongue, in fact, can cause anterior open bites, unilateral and bilateral open bites, mono and bilateral cross bites, total open bites with contacts only on the last molars, anterior reverse bites, total reverse bites, third functional classes, increased overjet, increased overbyte, space between teeth and covered bites. In addition, an abnormal swallowing associated with muscle imbalance can give rise to some forms of periodontal disease which, even if in the presence of good dental hygiene, can cause situations such as gingival recessions, bone resorption and dental spreading in some patients. In evaluating swallowing, it is also important to consider the possible presence of a short frenulum and a tongue with low posture which consequently affects correct nasal breathing.

Nasal breathing is one of the main vital functions of our life, as it is necessary to bring oxygen to the tissues and remove carbon dioxide. We breathe about 18,000 times a day, at birth the maxillary sinuses are very small. It is considered that with each nasal breath the inhaled air pneumatizes them and makes them grow. It must be taken into account that the underlying part of the maxilla corresponds to the ceiling of the palate. If this is sufficiently stimulated it will develop sufficiently to create the necessary space for the eruption of permanent teeth up to the age of 12, that is, until the end of skeletal and dental growth.

The nose, with its micro-hair and blood microcirculation system, filters impurities from the air and heats it. This happens only through a physiological and correct nasal breathing. It is also necessary to consider the direct connection between nasal breathing and ear; this through a canal (ear canal) communicates with the back wall of the throat and serves for drainage into the pharynx and mucus secreted from the ear mucosa. If the ear canal is closed, an accumulation of mucus will result, which will be responsible for ear infections, even severe, chronic or acute. Proper nasal breathing allows air to pass close to the auditory duct, thus providing a vacuum suction system. Breathing, therefore, is a consequence of various issues pertaining to the otolaryngologist in both children and adults.

It would be enough to observe that all people who breathe with their mouth have more or less severe dysmorphosis of the same. We can therefore consider that oral breathing is the cause of insufficient growth of the palate with consequent crowding of the teeth, which may also be the cause of deformations and a more or less important incorrect development of the face.

Oral breathing favors the onset of short, superficial, unsatisfactory, in itself anxiogenic breathing, which reduces night rest in quality and quantity, worsens the threshold for waking up with anxiety (to which the phenomenon of nocturnal enuresis is frequently linked), constitutes a critical moment for the life of children, does not allow the nasal filter to be activated and this causes frequent recurrent inflammatory respiratory diseases of the oro-rhino-pharyngeal tract, for which it is necessary to pass as soon as possible to spontaneous physiological nasal breathing. The oral respirator will have a high, clavicular, small amplitude breathing, it will be poorly oxygenated and easily fatigued. Prevailing muscular tensions will appear at the level of the sternocleidomastoid muscles, the trapezius and the first rib.

Chewing begins with the appearance of the teeth following sucking. One of the criteria for recognizing good chewing is having a correct swallowing associated with a balanced mouth with all contacts of the upper and lower teeth on the side where the jaw is moved (right laterality and left laterality). When chewing, the food must be well interposed between the dental arches (jaw-jaw) like a crayon that turns in a mortar. If the mandible is positioned forward with respect to the maxilla, the latter will not have a chance to develop. Another important factor for good and correct chewing is to chew on both sides to keep the temporomandibular joints (TMJ) stable and in balance.

A monolateral chewing will allow over time a decompensation of the anomalous shape of the mandibular branch and mandibular condyle with consequent alterations and dysfunctions of the TMJs and deviation of the midlines, with the mandible deviating from the side where you chew the most. On the same side it will cause wear at the occlusal level, while the upright branch and the condyle will take on a more voluminous anatomical shape and on the contrary, on the opposite side they will refine. To understand well, just imagine walking by jumping on one foot only for a long time. What could be the consequences in terms of decompensation to compensate for this condition?

So chewing only on one side for the whole life will cause a deviation of the mandible and jaw from different sides which will cause different tensions of the neuro-muscular system, craniofacial with increased muscle tone on the chewing side and with inclination on one side of the head for muscle hypertonia. To chew well, therefore, it is necessary to coordinate alternating movements in right and left laterality. It is also necessary to consider the limited lateral movements of the jaw when there is an over-occlusion (deep bite), a condition that makes you unable to chew and grind food and, to prepare the food bolus, thus swallowing the food almost entirely and thus conditioning good digestion.

Over time, the stomach and intestines will have to compensate for the failure to chew food, becoming overloaded. In the mouth there are the taste buds with the two sense organs (taste-smell). To swallow whole food is to skip this stage of taste and smell. Quality chewing is of fundamental importance rather than eating like a robot, a situation that forces the body to compensate for digestion which will cause abnormalities in other organs which, being under stress, will affect the correct functioning of the body.

Even speech can be affected by incorrect swallowing and breathing as regards the articulation of sounds. Good swallowing prevents the tongue from getting into the teeth with a good foothold. It also produces a decontraction of the lips and the whole, associated with a good nasal breathing allows a good phonation.

In all cases of dysmorphosis of the mouth, therefore, an atypical swallowing, oral breathing, abnormal chewing and impaired phonation can be found. All these functions are called autonomic functions and, since one of these functions is somewhat disturbed, so are the others to a different degree.

When a mouth does not work well it is because there are systemic associated autonomic dysfunctions.

In these cases, the use of functional orthodontic devices such as AMCOP Bio-Activators, in association with specific exercises, can be of great help in the treatment of the various imbalances listed with an improvement in correct swallowing, with the relaxation of the facial muscles and nasal breathing.

With Bio-Activators, functional orthodontic devices, it is possible to bring the mouth to a situation of equilibrium, orienting growth towards normality. 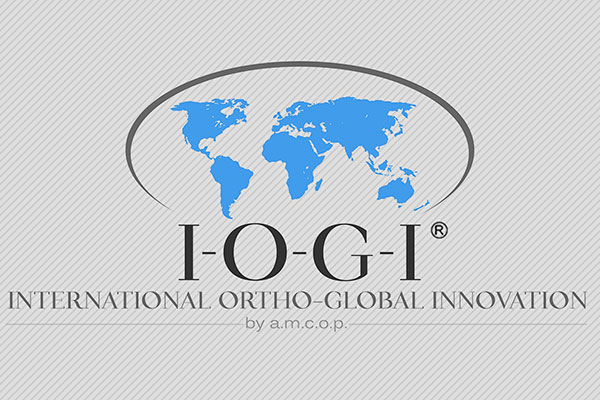 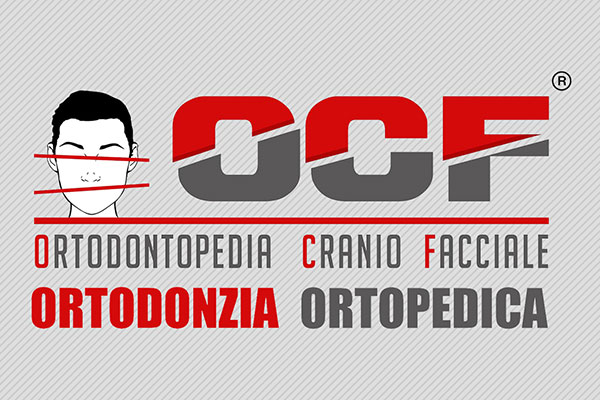 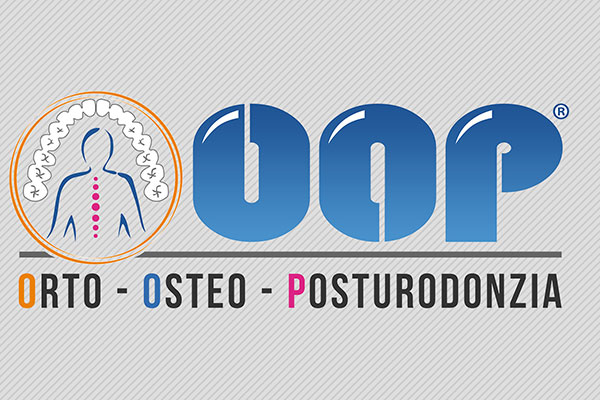